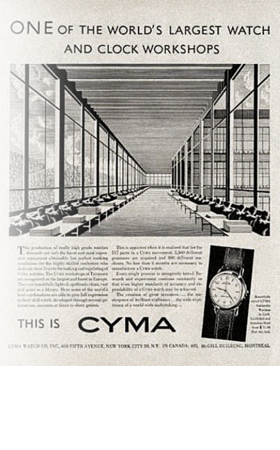 From the early 20th century onwards, the company received numerous awards, notably for its prowess in extra-slim watches. In 1903, it was awarded the coveted chronometer certificate issued by the Neuchâtel Observatory for its invention of a new extra-flat lever movement fitted inside a pocket watch. Two years later, Cyma introduced the calibre 701 with a thickness of just 3.85mm – a remarkable achievement for the time. In recognition of its watchmaking feats, the company won first prize at the World Fair in Brussels in 1910.

Output, meanwhile, had risen significantly, with some 2,500 movements being assembled daily in the workshops. From 1915, Cyma’s highly skilled designers and technicians were elaborating shock-resistant movements of unparalleled strength, along with the first waterproof models, which were finished to an equally high standard.

During the 1920s, the company was at the forefront of component interchangeability, which enabled its workshops to produce watches on a much bigger scale. By 1929, Cyma boasted the biggest workshop in Europe and employed 2,000 people to assemble 4,000 watches a day. In the same year, the company received first prize at the International Barcelona Exposition.